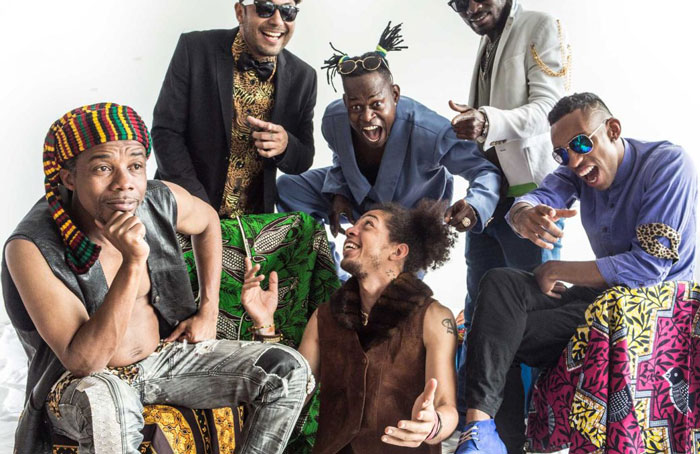 Tribu Baharú is an afro-champeta music crew from Bogotá, Colombia, whose sound emerged from the Colombian Caribbean with influences from the “Pico” culture of Barranquilla and Cartagena. Founded in 2009, Tribu Baharú has evolved to become one of the most important Afro-Champeta ensembles on the current international scene. They have played at SXSW; globalFEST in New York, NY; WOMEX in Santiago de Compostela, Spain; John F. Kennedy Center for the Performing Arts in Washington, DC; American Folk Festival in Bangor, ME; El Gran Festival Colombiano! in Chicago, Il; Pan American Festival in Toronto, Ontario; Montreal Jazz Festival in Montreal, Quebec among many other venues.

This summer, Abington Art Center is partnering with Philadelphia’s Lucky Goat Coffee House to present the first annual World Music Series. World-class performers from Cuba, Columbia, Haiti, Nigeria, and the USA will be performing on our outdoor stage over six Thursday evenings from June 22 – July 27 at 7:00 pm. These culturally unique performances are unlike any in the Philadelphia region. This is the first year of the AAC reimagined concert series, although our program and production team have over 30 years of experience presenting international arts.

The event is open and free to the public, and guests are encouraged to come early and picnic on the lawn with their own blankets and chairs. We do have food available for purchase from The Allways Cafe, beer from Yards Brewing Company, and water ice from Rita’s in Rockledge.

Music has always had the power to bring communities together and cross the boundaries of geography, economics, religion and culture. Pitch and beat connect to the emotions, creating a direct line to the human ability to respond, understand and have compassion. This is what is great – when an audience is transported by sound to greater sense of our potential.