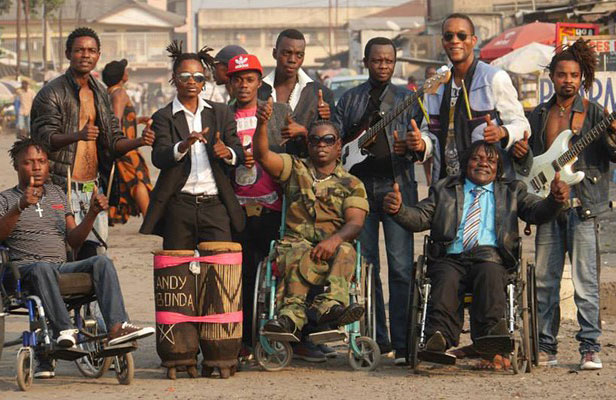 “The future of a country lies in the ability of its inhabitants to invent a utopia that its future can bear,” writes the Congolese writer Muepu Muamba. Mbongwana Star solves this promise. The band is self-described as “a seven-headed orchestra” from the politically dysfunctional capital city, Kinshasa, a place always on the brink of collapse. Mbongwana Star creates an Afro-futuristic sound that authentically represents the Congo, which developed a space travel program in the 70’s and now supplies the Coltan for our mobile phones. Coco Ngambali and Theo Nzonza, who lead the band, came from ‘Staff Benda Bilili,’ a group of polio-impaired wheelchair users, who performed on the streets using Kinshasa’s tin cans and African radio rhythms. They hired a group of local young musicians who transformed the popular melodies and rhythms of the Congo into an uncharted cosmos far beyond the power of Western Africas. Their debut album, From Kinshasa, was released in 2015 to universal acclaim.

This summer, Abington Art Center is partnering with Philadelphia’s Lucky Goat Coffee House to present the first annual World Music Series. World-class performers from Cuba, Columbia, Haiti, Nigeria, and the USA will be performing on our outdoor stage over six Thursday evenings from June 22 – July 27 at 7:00 pm. These culturally unique performances are unlike any in the Philadelphia region. This is the first year of the AAC reimagined concert series, although our program and production team have over 30 years of experience presenting international arts.

The event is open and free to the public, and guests are encouraged to come early and picnic on the lawn with their own blankets and chairs. We do have food available for purchase from The Allways Cafe, beer from Yards Brewing Company, and water ice from Rita’s in Rockledge.

Music has always had the power to bring communities together and cross the boundaries of geography, economics, religion and culture. Pitch and beat connect to the emotions, creating a direct line to the human ability to respond, understand and have compassion. This is what is great – when an audience is transported by sound to greater sense of our potential.